The Science Of Flavor 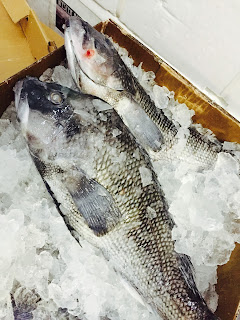 Here's a good question to get things going: which tastes better, a saltwater fish you catch and eat on the boat, minutes after it is caught, or one you catch and eat a couple of days later?  The answer is all about flavor, when it happens, when it peaks, and why.

First, let's get some science out of the way.  Every one understands that fish flesh is built differently than terrestrial animal flesh, and a lot of it has to due with the fact that fish don't have to fight gravity in the water.  Saltwater fish, however, load their muscles with free amine oxides and amino acids to counter balance the osmotic pressure of living in the ocean.  Without this balance, they would surely collapse in on themselves, not a pretty picture!  These free amino acids include the tasty compounds inosine monophosphate (IMP), glutamate and glycine.  IMP is a result of the breakdown of adenosine triphosphate (ATP) and is what gives many seafood items that savory dashi flavor.  Glutamate is the key flavor of umami, that savory bite that triggers our fifth sense of taste which lies somewhere between savory and heaven.  Glycine is mostly associated with sweetness and is predominately associated with delicious shellfish.


Ok, if you are still with me, we are going to jump into the meat of the question to get our answer.  These flavorful amino acids are found in much larger concentrations in fish than they are in land animals.  They are what make saltwater fish tasty and desirable, but they don't reach their peak flavor until the muscles begin to break down.  Directly after a fish is killed, its muscles are still bound together and have yet to disassemble into tasty amino acids.  The muscles will lock into place, a state called rigor mortis, and must be given time to continue to break down and develop into smaller compounds.  Fish flesh ages more rapidly than beef and it usually takes about 24 hours for fish to develop the mouthwatering qualities of IMP and glutamate.  Some fish, such as tuna, actually don't reach peak flavor until days later.  The bigger, oilier fish usually take longer.  If aging fish seems like a foreign concept, don't worry.  Most people think the closer the fish is out of the water the better it tastes, and for the most part they are generally right, but there are instances where a fish can be "too fresh" to enjoy.  Chefs, especially sushi chefs, wrestle with this dance after death at every serving, agonizing over the artful balance of flavor and time. 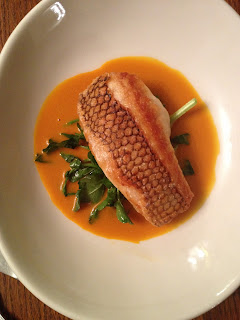 To give perspective, amino acids in beef break down at a much slower rate, meaning beef usually takes a couple of weeks to reach peak flavor.  Some companies age it even longer to allow more IMP to develop.  If it's all about getting the most flavor out of your catch, it makes the most sense to prepare your haul soon after it has come out of rigor mortis, but not before.  In the case of tuna, you might be better off waiting a couple of days.  Fresh and flavor usually run synonymous around the fish business, but there's a great deal of science happening under the flesh that makes that equation an incredibly difficult one to balance correctly.  I suggest we just leave this problem solving for the professional chefs, while we reap the pleasure of the outcomes.