Don't Give Up On Salmon

Recently, a market patron presented me with an idea he received from his doctor: that there was no nutritional value to eating farmed salmon.  Perplexed as to why a doctor would prescribe this nonsense, I was taken aback.  Being a simple fishmonger, it was difficult, nay, impossible to change this gentleman's mind at the time.  I mean, the advice came from a doctor.  Cleary a professional's opinion, one who's spent years understanding the human body and its needs, is going to outweigh the advice from a guy with fish guts on his shoes. 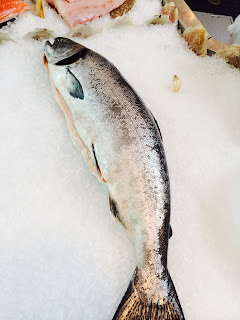 That being said, I thought this blog would be the appropriate forum for a few points on the benefits of eating high-quality farmed salmon, seeing as wild salmon season is shortly coming to an end in the upcoming weeks.  Wild salmon is a terrific choice but, soon, when the season ends, it will only be found frozen in our local markets.  In the case of fresh fish versus frozen, I am always going to advocate for fresh, and when the wild salmon season ends, I recommend trying our fresh farmed salmon.  Here's why.

Contaminants have historically been an issue with farmed salmon as a result of the salmon's feed.  You can still find these studies circulating the web, and often I have entertained arguments from customers using these outdated studies as "proof".  Look carefully though and you will realize that the majority of the contamination arguments quote studies that were conducted in 2002 or earlier.  Much in the way of feed improvement has happened in the last 13 years.  Salmon aquaculture (that is, farming) has greatly improved the feed recipes, eliminating the high levels of PCB's (Polychlorinate biphenyl, which is the organic pollutant historically associated with salmon farming) and other contaminants.  Today strict rules regulate the levels of contaminants that can be found in fish feed ingredients.  Now organic contaminants in farmed salmon are found at similar levels as those found in wild salmon, both at very low levels.

Salmon farming practices are getting better.  In the late 90's and early 2000's salmon farming came under intense fire for polluting their surrounding environments and harming the local wild populations of fish.  Efforts were made and there has been much success in fighting these issues.  Farms like Skuna Bay in British Columbia have reduced stocking densities, which has assisted with lowering the outbreak of disease, without the use of antibiotics.  Farms only stock sterile fish and pen technology has reduced the chance of escapees.  Many salmon farms practice crop rotation, moving open pens so that surrounding ocean environments can replenish and recover naturally.  It should also be noted that all reputable salmon farms such as Northern Harvest and True North have eliminated the use of dyes, hormones, and antibiotics in the farming process.  Land based salmon farming is in its infancy, but I predict by 2018 you will begin seeing fish reared on land being available to the domestic market.

Salmon, farmed and wild, is a healthy option when it comes to the question of what to eat.  The nutritional benefits of eating farmed salmon are numerous.  They contain healthy fatty acids, minerals, and vitamins that are not found at such high levels in other proteins.  I am no doctor, so I recommend you do the research and figure out what is best for you and your diet.  However, when quoting a study, it's just like purchasing the egg salad on special: it's best to check the date.