The Bluefin In Our Market 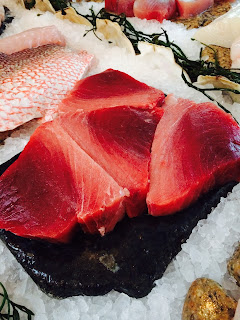 For many years we made the decision as a company not to sell one of the tastiest, most exquisite seafood options in the world due to its sustainability status.  Anyone who has bothered to pay attention to seafood news, even if only peripherally, in the last ten years will tell you that there are issues with eating Bluefin tuna.  Even if you have never picked up a color coded card of seafood sustainability, the chances are if asked to name a seafood option that is not sustainable, Bluefin will most likely be the first fish name to cross your lips.  The fish has made headlines, and not in a good way.  Yes it is delicious.  Yes it is overfished.  So why are we offering it this summer?

It has nothing to do with lust or greed, or some deal we made with the devil.  The landscape of the Bluefin fishery has changed, and this isn't some secret that only we are privy to, like some clandestine password that gets you into the hottest of seafood sources.  The information below is out there for all to see and has been but, unfortunately, good news on the subject often gets overlooked in the headlines.  I'll let you in on the basics of the deal, so that you can decide for yourself if Bluefin is an option you and your dinner companions can stomach.


First, there are 3 different Bluefin tuna populations; Northern, Southern, and Pacific, each with different issues posing varying degrees of problems.  In this blog we will be discussing Northern Bluefin only.  Northern Bluefin, also known as Atlantic Bluefin, can be further divided into two groups: Western and Eastern.  Though the two stocks intermingle, we will be focusing on the Western stock which is caught off the coast of North America and is primarily fished by Canada, Japan, and the U.S.

Bluefin tuna are a highly migratory species, so it takes the effort of many nations and agencies to oversee and report the results of the fishery.  In the U.S., the Western stock is managed by the Atlantic Highly Migratory Species Management Division, which sets regulations.  These limits are based on conservation and management recommendations from the International Commission for the Conservation of Atlantic Tunas (ICCAT).  From 1972 to 1992 the Atlantic stock declined steadily and as of 2002 the spawning stock biomass (number of fish in the ocean at an age in which they are able to spawn) was at about 25 to 30 percent of the 1970 level. However, ICCAT started a rebuilding program in 1998 and the spawning stock biomass has increased by 70 percent since.  According to the 2014 assessment, Western Atlantic Bluefin tuna are no longer subject to overfishing. 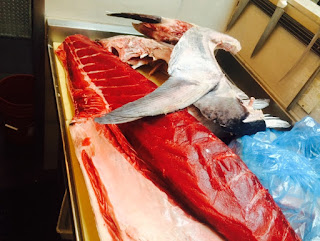 Let's back up for a moment.  The Western Atlantic fishery we currently and solely purchase from is a U.S.-regulated fishery that occurs in U.S. waters by domestic fishermen who use either hook and line gear or harpoon to selectively harvest fish.  There is no by-catch and all tuna caught get reported.  Overfishing is not occurring.  The species remains overfished, however, according to NOAA and part of the reason for this is that NOAA is taking into consideration the mixing of the Eastern and Western stocks.  I must stress here though that, although the stock remains overfished, fishermen are able to harvest fish at low levels and still continue to ensure that the stock is able to rebuild and replenish itself to a sustainable level.  Thus, the species can be overfished without overfishing taking place.  Harvest is taking place at safe, conservative, healthy levels.

Our Bluefin tuna is caught by guys like Captain Tyler Mccallister of the FV Cynthia C.  We know where the fish are coming from and we know who's catching them and how they are doing it.  The fish are reported.  The stock may be overfished, but the rebuilding plan is working and in this particular fishery overfishing is not the result.  Fish can be taken out of the water while a species is restored to a healthy and sustainable population.  Our market will sell Atlantic Bluefin tuna on a regular basis for the first time ever this year.  We will do it with a good conscience.  We buy a specific fish from a specific fishery.  It's a science, environmental, and dinning based decision.  It's a way to support a domestic fishery doing the right thing.  It's also a way for people to show that they can responsibly enjoy the best tasting tuna available without sacrificing the integrity of the species or their ethics.
Posted by MJ Gimbar at 2:58 PM