It is almost September and we are about to enter the good days of mussel season, they peak usually from September to April.  During this time you can enjoy one of the tastiest and most inexpensive bi-valve available.  This is due to the fact that since the 1970's mussels have gone from dirty bait and bio-foulant to featured item on menus everywhere.  What happened to awaken the world to these tasty morsels is the introduction of myticulture - mussel farming - on a large scale.  The northeast coasts of the U.S. and Canada combined has proven to be a hot spot for growing beautiful, grit free blue mussels and since this discovery mussel consumption has grown tremendously.  About 50 million pounds of mussels a year are sold to U.S. consumers through restaurants and markets, most of them coming from Prince Edward Island, Canada.  With that many mussels passing through U.S. kitchens, you would think that we would have the myths debunked and the problems solved.  In my experience that is not so.  One legend that refuses to die is that mussels that do not open during cooking should be discarded.  This just isn't the truth, not even close. 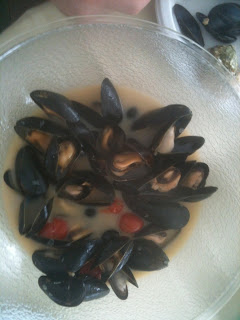 Its been offered that this myth began with the work of Jane Grigson in 1973.  In her food preparation publication, Fish Book, she asserts that mussels that do not open after cooking should be discarded.  Up until this publication there had not been mention of discarding mussels that would not open after cooking in any of the renowned professional cookbooks of the time.  For some reason or another, this logic stuck, and has been recited by chefs, cooks, and your everyday novices since.  What is happening when you are cooking mussels?

The mussel is made up of two halves (that's why its a bi-valve) and contains mostly ligament and adductor muscles.  They have a tendency to stay open and feed and it's the adductor muscles that allow the mussel to close tightly.  When cooking mussels there are a couple of things that happen to that adductor.  In most scenarios the adductor weakens or disintegrates which releases the mussel and the mussel opens, this is the case for most occasions.  Sometimes the adductor can completely separate from the shell.  In this scenario it is possible for the mussel not to open.  When this happens simply slide a knife through the mussel shell after it has ample time to cook through and separate the two shells.  If preparing mussels and you notice that most of them open with only a few still closed, remove the mussels that are open and finished cooking from the pot and continue to cook the remaining mussels that have not opened.  Usually an extra 90 seconds will do the trick.  Do not let them sit too long, you don't want them to overcook.  This is when the knife method comes in handy.  You just want to make sure that the mussels have fully cooked and you can do this just by looking at the meat.  A cooked mussel will give off a pleasing aroma and the meat will be plump, coagulated, and vibrant looking.  Uncooked mussels will be stringy, un-coagulated, jelly-like, clinging to the shell still, and sometimes give off a foul odor.  Never eat mussels or any shellfish that give off a foul odor.

In some cases mussels open right away, even before thoroughly cooking.  In these cases leave them in the pot for an extra minute or so, until they are done.  Really the best way to inspect your mussels is while they are still alive, before they even hit the pan, actually before you ever get them home.  Avoid mussels that smell bad or release foul odors.  Mussels should smell like the sea.  If a mussel is open, tap the shell.  If it does not close on its on after being 'ruffled' then that mussel is dead and you should not purchase it or attempt to cook it.  Mussels will open up to 'air out', but only live mussels will close when disturbed.  Buy your mussels from respectable fish markets that are clean and that inspect the harvest dates when they receive mussels.  The less days the mussel is out of the water, the better it will taste.

It's always a good thing to consume mussels on a regular basis.  They offer families an inexpensive seafood protein that is quite often overlooked when deciding between all the more popular seafood options.  Remember that mussels are high in iron, vitamin B12, selenium, and contain good sterols.  Another myth for another time is that mussels are high in cholesterol.  This of course, is not true either. Sometimes myths and legends become so ingrained into our collective psyche that the truth gets lost and mussels get thrown out.  Hopefully this helps keep some good mussels in your bowl and out of your trashcan.
Posted by MJ Gimbar at 12:40 PM