Salmon of the Gods

Imagine a fish that is as round and as big as one of those old gulf gas station signs, with deep, round eyes that are as large as baseballs and seem to stare up into outer space looking for neighbors.  This fish is perfectly round, hot pink on the belly and electric blue on its back, and has iridescent silver spots that reflect the moonlight in the water.  It's dark red lips protrude forth as if it had been feeding on shrimp all day with a serious shellfish allergic reaction.  Sounds like something I conjured from watching too many bad sci-fi movies.  Or better yet, some super fish that haunts divers everywhere and has only been heard of, never seen, living in the deepest recesses of our collective oceanic nightmares.  Well don't let the awkward appearance fool you.  This fish does exist, and as a matter of fact, the opah or 'moonfish' has been a delicacy in Hawaii for centuries.  It is from Hawaii that opah gets its title of 'salmon of the gods', and it is there where its sweet flesh is appreciated as sashimi and other preparations. 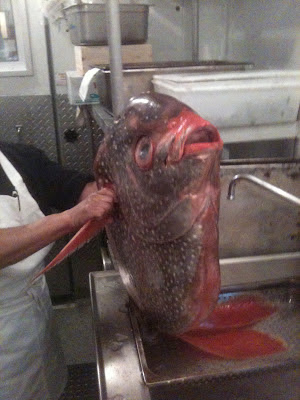 Opah are oval shaped, large - sometimes over 150 lbs - solitary fish that swim in temperate waters.  Little is known about the opah's life history, even though it is rather abundant, due to the fact that it is considered a wandering species - often caught as bycatch from tuna and swordfish fisheries.  It is most often taken by longline in Hawaii, but is not a targeted species there either.

Opah flesh can best be described as a cross between swordfish and tuna.  The top loin is the most preferred part of the fish with the belly being very fatty and best sliced as sashimi or seared rare.  The top loin is usually lean, sweet and deep red to deep orange in color.  The belly tends to be a little denser and lighter in color.  In general, this is a fish that is meant for the grill or saute pan.  You don't want to overcook the opah, it can get really dry like swordfish when this happens, so keeping it a medium rare or less is my suggestion.  It goes especially well with fruit preparations like a chutney or salsa.

So why eat opah?  Well to start, it is really good for you.  Opah, like other fatty, cold water fish, is very rich in beneficial omega-3 fatty acids.  It is easily digestible, high in protein, and a great source of B vitamins, selenium, and other minerals.  Since it is a bycatch of the stressed tuna and swordfish fisheries, it is also a wise environmental choice for dinner.  So the next time you are in the market for a grill fish, give tuna, salmon, marlin and swordfish a break.  Take a chance on the beautiful, majestic opah.  It is after all, fish for the gods.
Posted by MJ Gimbar at 7:55 AM