As the summer wreaks havoc on our air conditioners and melts our ice cream, it's nice to step inside and think about the upcoming cooler months and the great fish that comes with them.  While it's difficult to accurately project everything that swims in with abundance in the future months, I am going to take to task giving you a glimpse of what will most likely be on the shelves and on your dinner plates.  Of course, keep in mind that hurricanes, extended heat waves, and good ole' natural aberrations could screw this all up.

August through November usually sees a plethora of dynamite North American swordfish.  This year's report shows that fish are big and bountiful and expectations are high for great fish to hit the market at a good clip.  Harpoon season opens up soon, usually with New Jersey being first and later the Canadians join the fun.  Harpoon swordfish is of the highest quality, boats usually go out to sea and return the same day.  As far as sustainability goes, swordfish stocks are looking great and the by-catch off of these boats is negligible.  Check out an article I published earlier on the subject in this blog's archives. 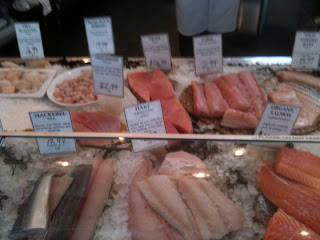 Fall with its cooler weather also stimulates fish to begin 'fattening' up.  This time of year you see great mackerel, crab meat, black sea bass, grey mullet, trigger fish, and grey tilefish.  Mackerel especially get a great fat content during these months, making their flavor stand out.  As far as eating a fish raw, I can't say that there are many better choices during these months.  Soft shell crabs are usually going out of season around October, but this is the time to buy hard shell live crabs and crab meat.  It is during this time that crabs begin to fatten up for the winter and the meat is at its sweetest.  The southern states, like VA, NC, and FL will begin producing black bass, mullet, trigger, and tilefish.  These fish don't get the notoriety they deserve and that only means you should definitely give them a try.  The meat is white, the stocks are great and its always good to take some of the fishing pressure off of tuna, salmon, and halibut.

Though tuna is available year round, fatty big eye usually spikes around August and September, when quality fish seems to be landed daily.  Yellowfin will usually get better as colder months like November and December roll through.  We can't neglect mentioning the little fish either:  Fresh sardines and fresh anchovies are at their best during the fall months.  This is the time of the year when these smaller feeder fish are exquisite in flavor and offer a small package packed with intense flavor.  It is also important to mention that they are sustainable and are one of the healthiest seafood options out there. 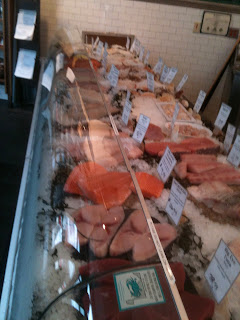 Shellfish...well, shellfish begin to thrive during the fall months.  In fact this is the best time to enjoy oysters, clams, and mussels.  This is when they are feeding heavily in order to create stores that will get them through the long winter.  If I were you I would make a bee-line to the oyster bar and not get up from my seat until I've done my part to replenish the Bay with empty oyster shells.  I probably don't have to tell you, but I'll remind you that everyone's favorite bi-valve comes into season in November - Nantucket Bay Scallops.  For this delicacy, there is no equal.

Here's a list of fish to get your fill of as fall makes its way with turning leaves and beautiful weather.  Fresh West Coast sable fish and halibut seasons end in November.  Soft shells will most likely run their course during October.  Wild King and Sockeye salmon runs usually dwindle and become too expensive during September and October.  So my advice is to get your fill of these items over the next few months, unless you prefer frozen items to fresh.  As for me, I like eating with the seasons, it just seems natural.