Another year and another summer is going by leaving me one more year removed from the last time I tasted the best salmon, by far, that I have had the pleasure of sampling.  It was Yukon Gold, better known as a Yukon King Salmon, and it is probably more scarce than gold from the same river these days.  The Yukon River is the largest river in Alaska and the kings (chinook) native to that river grow fatter and tastier than any other wild salmon out there.  They grow so big and fatty in order to make that long trek up the river to spawn.  This makes them taste better than anything else available and it is one of the reasons I have sought after these fish every summer since my first taste.

It was 2006 I believe, when I first got to see one of these Yukon monsters.  I was working in a market in New York and we received a small shipment, about three fish, in a box that weighed close to 100lbs.  The fish I was allowed to sample weighed at least 30lbs and it was about as wide as most sockeye are long.  The fat lines on the belly seemed to be as wide as my fingernail, enough to make the biggest of farmed salmon jealous.  The great part was this fat was all natural, all wild.  My co-workers and I tasted the salmon raw, of course, letting the natural oils melt into our mouths and evaporate into our taste buds.  The salmon reminded me of eating great pork that just seems to fall off the bone if you just happen to look at it.  But the flavor was not of the earth, it was of the ocean, as if the waters had given birth to a savory butter intermingled with notes of rich salmon and creamy melon flavored oysters.  I was able to garner 3 or 4 slices raw and had the privilege of trying a portion seared rare.  The crispy skin turned out to be more succulent than thick bacon, due to all the fat, and the rich flavor was not lost in the preparation.  I don't think I took this experience for granted, but it's easy to say that I have waited anxiously ever since for my next bite.  I have tasted some wonderful salmon since, be it from the Copper River, Columbia River, Bristol Bay, or Kalamath, but nothing has come close to the complexity and richness of the Yukon King. 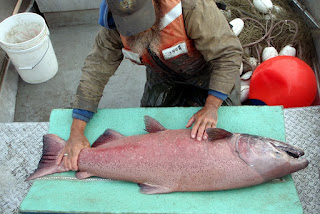 That brings me to the present where I have just received the fish report coming out of the Yukon.  It looks like another year without the king of kings.  There just are not enough fish to commercially sell this year.  Actually the report is a little more disturbing.  There might not be enough fish for the natives to fish for subsistence.  Over the past few years some fishing has been allowed for these kings so that families living along the river could have fish to feed themselves.  Numbers are being reported to be at an all time low, so that privilege may be taken away.  Authorities are hoping that the fish are just late to show due to heavy ice interfering with their passage.  We all will know for sure in just a few days.  It is possible that the fishery is closed completely.  For now though I will have to wait another summer to get my hands on one of these spectacular fish.  I want the kings to come back in full force and if that means I have to wait 50 years I will.  I won't ever forget how wonderful salmon can be.  I hope if the population of these big monsters ever returns to its historical numbers, that we remember to protect this special resource, whether its one fish passing to spawn or one slice being served at a time.