Recently Jeff Black and I took a trip to Rhode Island to visit our good friends at American Mussel Harvesters.  AMH sells east coast mussels,  a variety of oysters, and east coast clams all over the country. They specialize in fresh shellfish and also farm oysters and mussels themselves with the beautiful salt ponds of Rhode Island and open ocean as their backdrop.  We also visited the Town Dock, which specializes in squid and also sells some fresh product from short trip and day boats.  I just wanted to share some pictures from that great trip. 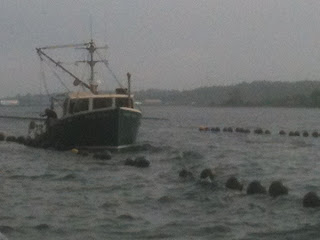 To the left is a picture of one of AMH's boats working their oyster cages.  Each black buoy represents an oyster cage.  Seed grows out to about an inch and is placed here in cages where it feeds on the algae rich currents.  In this photo the boats are pulling up the cages to clean them of hitchhikers like mussels and creatures that resemble sea squirts.  Its a difficult and time consuming job, but it must be done to protect the prized oysters that are inside the cages. 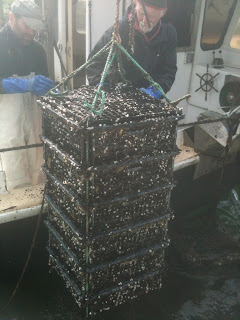 To the right is a photo of one of the cages that has been pulled aboard the boat.  Using scrapers and power washers the tiny creatures that have hitched a ride will be cleaned away so that the oysters inside the cage will be able to feed and prosper.  The accepted term for these type of intruders is bio-fouling.  The cages are suspended off bottom and inside are Umami and Quonset Oysters that we carry at BlackSalt.  The Quonset oysters are typically a little larger than the Umami Oysters and are named after a Navy metal structure that has a round metal roof and was typically built by the Navy Seabees.  These structures still dot the Rhode Island landscape, though the Navy presence has been decreased.  The waters here produce oysters that are very flavorful, with hints of vegetable, savory, brine and a nuttiness that finishes clean and sweet. 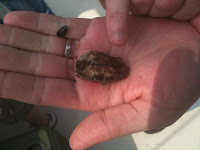 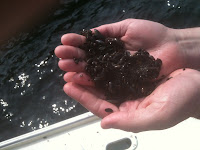 To the left, a beautiful oyster from the cage, nascent in its stage of life, very soon it will come to a raw bar near you full of flavor and good times.  To the right, some of the mussels or bio-fouling cleaned from the outsides of the cage.  Hey, no one gets a free ride! 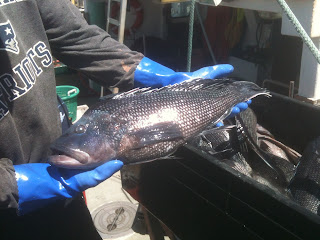 While visiting the Town Dock we happened to luck out and be there when one of their day-boats was arriving with a days worth of work.  Check out this trophy black bass in the photo at right.  Most of the fish we saw were still alive.  At the 'Dock the catch


will be graded and separated and then sold.  Usually fish comes into harbor in the morning and goes out that same day.  It just doesn't get any better than this.

Thanks again to the people at AMH and Town Dock, especially Patrick and Laura.  We had a great time visiting your top notch facilities and seeing all the quality product.  Its great to see companies doing the right things and producing great shellfish and fish.