Is that White Salmon? 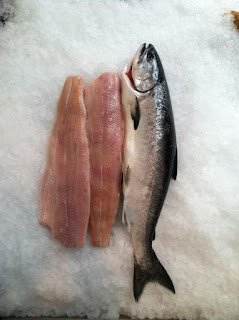 During the spring and summer months the West Coast blesses us with great fish.  One of the more exciting items is the Wild Salmon run.  By June fish stands everywhere will be decorated with bright fleshed Kings, Sockeyes, and Cohos.  The kings go for the big bucks because, well they are the kings.  They have a higher fat content than the other two species and also have delicious, strong flavors that scream for the grill.  If you are lucky you might happen to stumble upon an odd looking salmon labeled 'Ivory King Salmon'.  No, your eyes are not deceiving you, this salmon is white.  And don't be afraid, it didn't happen in some laboratory and it's not the marketing scheme of some greedy Seattle company.

Ivory or white fleshed salmon occurs naturally and affects about 1 in every 20 fish.  There have been many theories as to how this phenomenon happens, some stories about how their diets are different or that they are a completely different species.  Well those theories just don't hold their water, so to speak.  The 'ivory gene' only occurs in the king/chinook species.  They are the same fish as the red kings, swimming in the same waters and feeding on the same diet.  The difference between an Ivory and Red King is that the ivory salmon makes use of an enzyme that breaks down carotene.  Carotene is what makes red salmon red, this is true for shrimp and flamingos too.  Carotene is stored in the flesh of the 'normal' salmon instead of being broken down, unlike the white fleshed ivories.  This difference separates the whites from the reds and to my knowledge there is no way of telling whether you have a white or red on the line until you cut into the fish and see the flesh.

Years ago ivories were discarded and sold for much less than their brothers, the reds.  This was mostly due to the fact that people like to hold on to familiarity and resist change as much as possible.   Salmon is orange and that's just the way it is.  Today, unfortunately for us in the know, ivory salmon are held in high regard for their distinctive buttery-rich flavor and silky texture.  They will usually cost a little more because they are not as abundant, and they are really good.  They tend to be milder in that 'salmon' flavor than a typical king, but there is a nuttiness to their flavor that is just not duplicated in any other fish.  If you happen upon an ivory salmon on the fish stand I urge you to give it a try.  It is not a 'freak'!  Just another hidden jewel in the ocean's treasure chest.
Posted by MJ Gimbar at 8:51 AM