Daffodils are blooming, birds are chirping, and the sun is staying out a little longer each day.  If these signs are not enough to let you know that spring is here, well then you can also look to the fish market where signs of spring are beginning to decorate fresh ice displays everywhere.  For us in the Chesapeake region we generally look for the arrival of two famous harbingers of spring to let us know it's time to put our coats away and get out the grills.  Though they haven't quite made their way up the coast to our backyards, Shad and Soft Shell Crabs are here in our fish market, coming from the early runs in the more southern states.

For centuries Shad have been highly prized for their large roe sets.  Shad are anadromous fish, returning each spring to the rivers they were born in to repopulate and make way for the next generation of fish.  The males, sometimes 3 at a time, chase the females upstream in order to fertilize the eggs that she will release.  Shad are found from the Gulf of St.  Lawrence to Florida, but most fish are harvested between Connecticut and Georgia.  The meat tends to be strong in flavor with a high oil content, but the roe is the prize that most fishermen are really after.

When picking out your roe from the market make sure that the sacs are not split and that there are not many blood clots.  The membrane should be easy to discern and the color should range from dark red to red-orange.  Shad roe is much more subtle in flavor than the meat and most of the time it is cooked in bacon fat.  A simple recipe is preparing the roe sack in bacon fat and butter and sauteing it with onions.  Helpful hints include splitting the sack pair apart before cooking, dredging them in flour, and placing a lid on the saute pan due to the fact that the roe sacks have a tendency to burst and splatter. 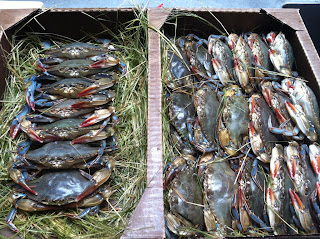 Soft Shell Crabs are already coming in from Florida. Usually we do not see these Bay favorites until late March and early April, but due to the warm weather, we are treated early this year.  Soft Shell Crabs are actually Blue Crabs harvested during their molting process.  The latin name for blue crab is translated as 'beautiful savory swimmer', and this is no more evident than in the succulent taste of soft shell crabs.  Males molt throughout their lives but females have one important or 'terminal' molt in which they are able to mate.  At this time a male crab fertilizes the female crab and she will store the sperm for future use.  Fishermen or in this case Crabbers, will harvest peeler and buster crabs (crabs about to molt) from estuaries and store them in floating trays with recirculating water.  They will continue to monitor the crabs like watchful mothers waiting for that perfect moment in between molt and hardening shell when the crabs are considered 'soft-shell'.  Once that moment arrives, the crabs are taken from the floating trays and packed to order.  They are separated by size which generally goes from hotel to prime to jumbo to whale, hotels being on the smaller end.

When picking out your soft shell crabs the softness of the crab is of the upmost importance.  You want to avoid paper-shelled crabs, which are crabs that have begun to harden.  You also want to find crabs that appear plump, try to avoid crabs that have been smashed or mishandled.  Remember this is a live and delicate product that is moved much more than it wishes to be, if it is missing a claw it's not the end of the world.

Cleaning soft shells is a cinch, I usually use scissors.  Just lift up the flaps on either side of the crab and remove the gills.  Next, cut off the face and pop any bubbles that appear, as these may burst during cooking.  Lastly, turn over the crab and remove the apron, the flap that is distinguishable on the bottom of the crab.  You should be able to figure out quickly if it is a male crab or female crab that you are working with, the shape of their respective aprons reveals everything you need to know.  Now that you have cleaned your crabs I have to recommend flouring them and frying 'em up in fat that has a good burning point, such as vegetable oil.  Grilling and sauteing also works well and in the Chesapeake Bay area I am sure that more cooking advice is a neighbor away.  Enjoy the the great weather and happy hunting in the fish market.
Posted by MJ Gimbar at 10:09 AM